The Divine Mercy of God – God the Most-Merciful, the Dispenser of Mercy 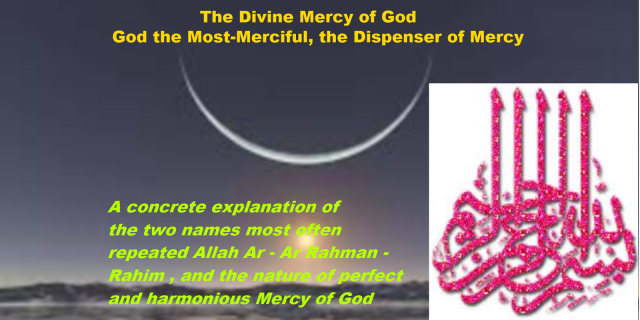 A concrete explanation of the two names most often repeated Allah Ar – Ar Rahman – Rahim , and the nature of perfect and harmonious Mercy of God

If someone asked , “Who is your God ? A Muslim response would be: ” The Beneficent, the Merciful . . “According to Islamic sources , the prophets , while insisting on the judgment of God, as proclaimed mercy in the Muslim scripture , God is presented as :

Vocabulary in the Islamic al- Rahman al- Rahim and are personal names of the living God . Both are derived from rahma name , which means “mercy” , “compassion” and ” tenderness ” . Ar – Rahman describes the nature of God to be merciful , and AR – Rahim describes his acts of piety provided its creation , a subtle difference , but it shows all the universal mercy .

These two names are some of the names used by God in the Quran : ar – Rahman is used fifty-seven times, while al- Raheem is used twice (one hundred fourteen) [On the contrary, the ‘Merciful’ does not appear as a divine name in the Bible. (Jewish Encyclopedia, ‘Names of God,’ p. 163)] A greater sense vehicle . kindness, the Prophet said :

” In fact , God is good and loves goodness. Agrees with what kindness does not agree with the harshness . ” ( Sahih Muslim)

Both are divine attributes which means God’s relationship with creation.

In a prayer that Muslims recite at least seventeen times a day , starting to say :

These names constantly remind Muslim divine mercy surrounding . All but one of the chapters of the Muslim scripture begins with the phrase : “In the name of God, the – Compassionate , the Merciful . ” Muslims begin in the name of God to express their ultimate dependence on it and remember mercy God every time I eat , drink , write a letter or do something important. Flowers spirituality banal. invocation at the beginning of every common act , it is important to call God’s blessing on this law and enshrines . the formula is a popular decorative motif of manuscripts and architectural ornamentation .

Distribution requires someone mercy mercy shown . He who shows mercy to be in need . Perfect thank you to care for the needy , then infinite mercy extends to those who need or do not need , the extension of this world wonderful life after death .

In Islamic doctrine , human beings in a personal relationship with the God loving, merciful , always ready to forgive our sins and to answer prayers , but there is no mercy in the human sense of feeling pain and sorrow for one trouble. God becomes human to understand suffering . Instead, God’s mercy is an attribute worth his holiness , bringing divine favor and help.

The mercy of God is immense :

Creation itself is an expression of divine grace , mercy and love. God invites us to observe the effects of mercy around us :

God loves compassion. Muslims view Islam is a religion of mercy . For them, their prophet is God’s gift of mercy to all mankind :

As they believe that Jesus was God’s mercy to people :

A daughter of the Prophet Muhammad , peace and blessings of God be upon him , sent for her sick child. He reminded that God is the giver, He is the one who takes , and each has a specific duration. Recalled that is patient. When the news of the death of his son succeeded him , tears ran from his eyes compassion . His colleagues were surprised . The Prophet of Mercy said :

” This is the compassion that God has placed in the hearts of his servants . Of all His servants, God will have mercy and compassion. ” ( Sahih al- Bukhari)

Blessed are the merciful, for they shall obtain mercy , as the Prophet Muhammad :

” God will have mercy on one who is not merciful to people. ” ( Sahih Al- Bukhari)

” The Merciful shows mercy to the merciful . Have mercy on those on earth , and the One above the heavens will have mercy on you . ” ( At- Tirmidhi )

The Divine Mercy of God – God the Most-Merciful, the Dispenser of Mercy

I will arise and go now, and go to Innisfree, And a small cabin build there, of clay and wattles made: Nine bean-rows will I have there, a hive for the honeybee, And live alone in the bee-loud glade. And I shall have some peace there, for peace comes dropping slow, Dropping from the veils of the morning to where the cricket sings; There midnight's all a glimmer, and noon a purple glow, And evening full of the linnet's wings. I will arise and go now, for always night and day I hear lake water lapping with low sounds by the shore; While I stand on the roadway, or on the pavements gray, I hear it in the deep heart's core.
View all posts by mogamoon188 →
This entry was posted in Divine, God, Mercy and tagged Divine, God, Mercy. Bookmark the permalink.